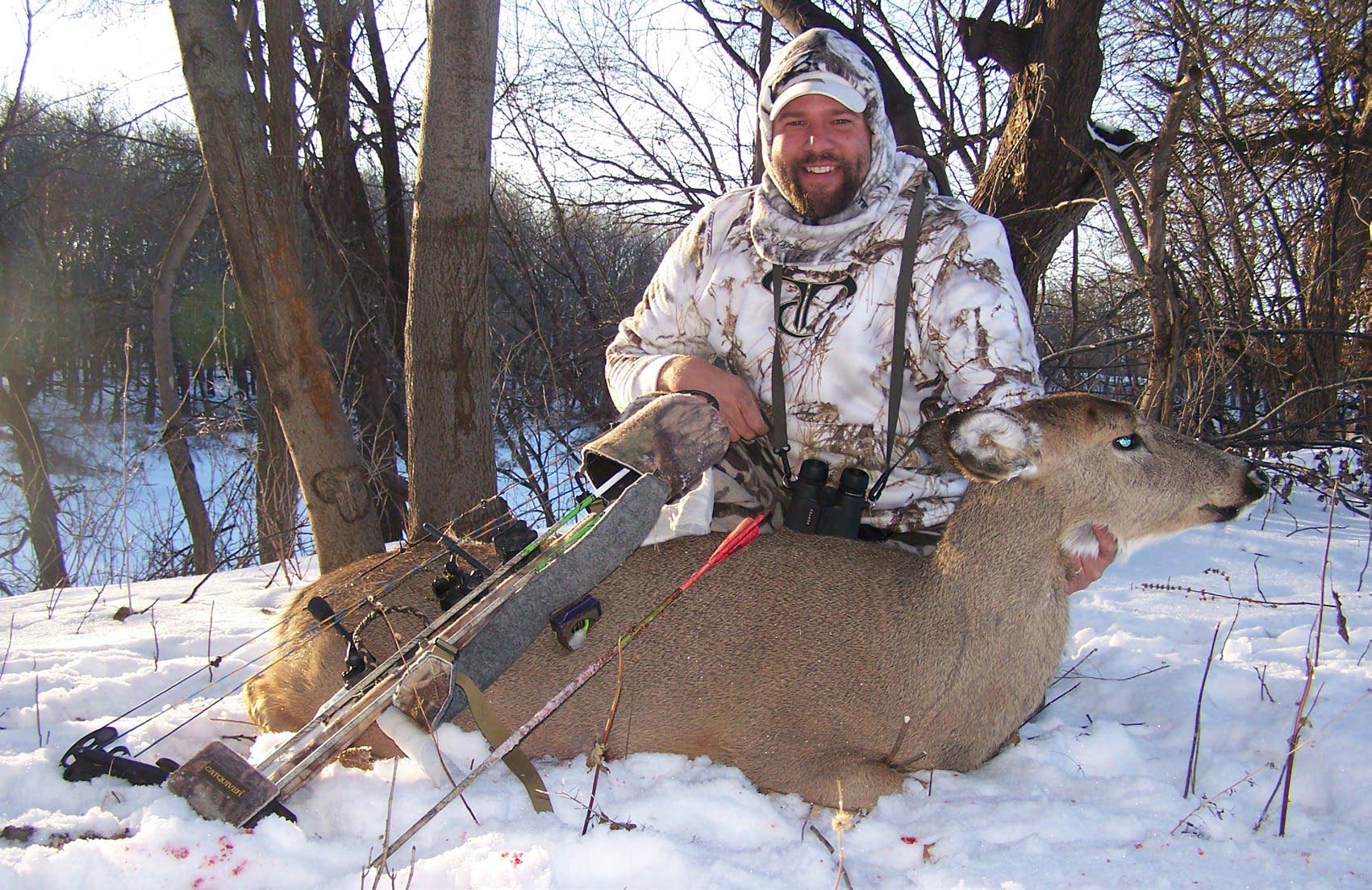 Deer and rivers go together like meat and potatoes. In nearly any region of the country, where there is a river, there are deer. While a piece of river bottom can produce deer at any period of the hunting season, they shine like a sparkling snowflake in the cold and snow of the late season.

While rivers are not impossible to navigate for deer when flowing, cold weather that locks them up open up a world of possibilities for not only deer but nearly all wildlife. Predators like fox, coyotes, mink and fisher will cruise up and the down the frozen highways, looking for the prey attracted to the brushy riverbanks. Living on the banks of a river, I can guarantee that, once the water is frozen, there will be a beaten trail down the center of the river. Frozen rivers allow wildlife to move freely, hidden from the eyes of humans.

For the hunter, this means access to deer that may have otherwise been off limits. I have participated in an urban, antlerless only deer reduction bowhunt in a city in my home state. As is true in most cities, a river runs through the metro area. Because of seasonal flooding, homes are not built in the riparian area near the water. The thin piece of cover is truly a wildlife mecca. I can stand in the snow-draped woods, with the sound of traffic and with view of downtown buildings in the distance, and find deer, fisher, coyote, fox and many other species of animal tracks. There have even been mountain lions sighted. 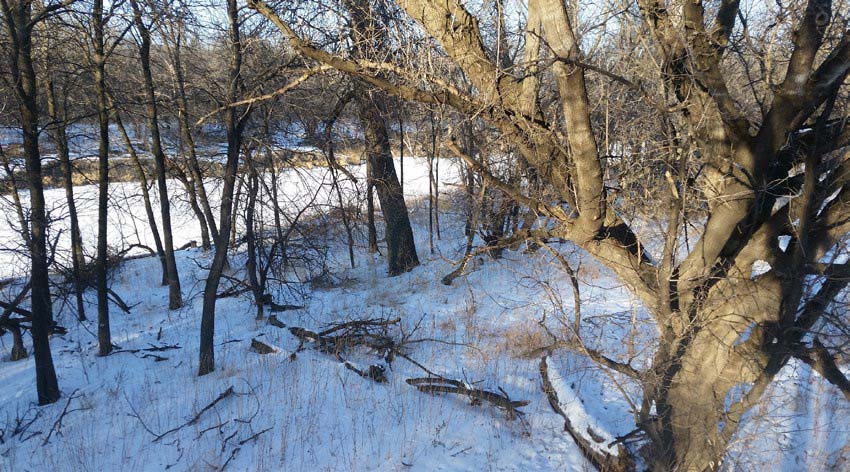 Hunters participating in this particular urban hunt are allowed to hunt both city-owned and park district owned land. As this land is open to the general public, hunters in the early part of the season often see many more people than deer. In addition, deer are often living on land across the river, as it is private with much less pressure. I’ve sat in my stand in September watching droves of deer across the river. All that was on my side was two-legged critters. With little reason to cross the water, the deer are content to stay away from the human pressure.

When cold weather hits in December, it often hits with a vengeance. Below-zero temperatures ice the river over quickly. Even though I wouldn’t dream of stepping on the ice, not wanting to plunge into the dark water below, the deer don’t seem to mind. Always curious, they begin to trek across the river to feed on winter browse in a new location, with far less people out in the cold.

Finding deer trails on the ice is the easy part. For one winter urban hunt, my pal Justin Fisher and I met at our spot over the noon lunch hour. With limited time, we hiked quickly around the property, looking for the hottest sign. It wasn’t hard to find. The difficult part was WHICH hot sign to hunt, as there were lots of it! There were numerous trails crossing the river going north and trails going south on the other side of the property. I decided on an ash tree with a multitude of trails converging within bow range. Prior to becoming park property, it had been a residential area. Arborvitae had been planted to hide the home from the road, and as high up as deer could reach was being eaten. Once it gets cold and snow is on the ground, nutritious browse becomes king. I had a feeling the deer would be eating those members of the white cedar family for weeks. 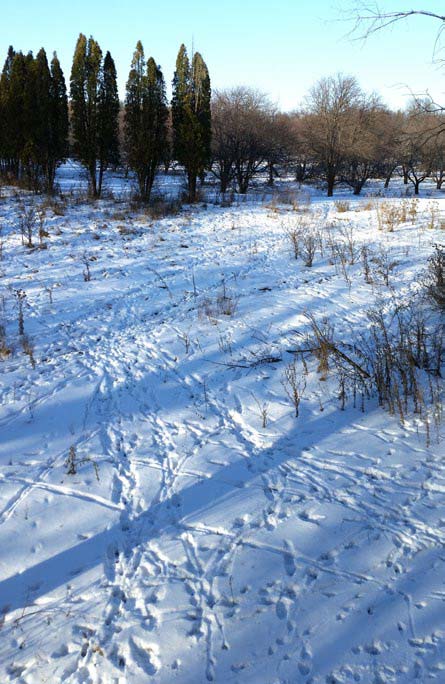 Leaving work early a late December afternoon, I quickly hung my stand in the ash. Unseasonably warm, the mercury was around 20 degrees on the plus side of zero. Forgoing my usual cold weather gear, I was dressed simply in a soft fleece hoodie and wool bibs. With the feeble winter sun still high in the sky, I settled in for the hunt.

I had just hung my bow on its peg when I noticed deer legs in the scattered trees in the center of the property. A quick look through my binoculars revealed a modest buck. Off limits for this hunt, it was exciting to see, nonetheless. It quickly became apparent that the buck wasn’t alone. An entire herd of deer were moving through the trees.

For reasons known only to them, after only 15 minutes of watching them they began to filter towards me and the river. With a cool winter breeze in my face, I slowly came to my feet when the lead deer was still 100 yards out. Two bucks lead the group of 20 deer, and I let them pass at 20 yards. Next in line was a fine mature doe, and when she paused on top of a cross-country ski trail that intersected the deer trail, I drew my bow. The top pin had barely settled when the air cleaved the cold air. Deer exploded in every direction, startled by the noise of the arrow passing through her chest. She took two bounds, looked around quizzically, and fell into a heap in the fresh snow near the bank of the river.

While that hunt occurred on a balmy winter day, most often the coldest days of the season are the best for deer movement. During another winter hunt, December was greeted with below zero temperatures and significant snow. Knocking on doors, I was fortunate to gain access to a piece of river property near the town where I was living.

The first weekend of December I walked the entire property. While there was more timber on the side of the river I was hunting, the deer appeared to be bedding on the opposite side. Following trails off the bank, a good number of them converged in section of forest where a mighty cottonwood had fallen. While the opening no doubt was covered in a flush of new growth during the growing season, most likely nettles, beggar’s lice, woodbine and other colonizing species, they had been laid flat by snow.

Even the densest hardwood forests in September look sparse after a snow, but a sinuous thicket of an aggressive invasive tree, the European buckthorn, funneled the deer from the river to the opening. Buckthorn leaf out very early in the Spring and retain green leaves well into Winter, allowing them to take over sections of forest with less aggressive native trees. A small silver lining in the dark cloud of ecological difficulty is that deer gravitate towards the thickets of buckthorn, as it provides dense cover even in the winter. The cherry on the top of the late-season cake was a gnarled boxelder, perfectly situated 18 yards from the convergence of trails.

My first evening in the stand was a bone-chilling -18 F. Having situated my stand parallel to the trail, the plan was to shoot from a sitting position. A few does and fawns wandered by, followed by a fine buck. In the still, frozen air, the slight movement it took to remove my bow from the hanger was all it took to alert the buck to my presence. I was forced to watch him duck back into the buckthorn before bounding back to the river. As the adrenaline subsided, the cold burrowed in.

A few evenings later I was back, with a different plan. I hung my Lone Wolf stand on the opposite side of the tree, intending to use the tree’s trunk to break my outline. Getting set nearly four hours before dark, it was to be a long, cold wait. To lessen any movement, I was prepared to stand the entire hunt, and installed the bow hanger directly in front of me. Any movement would have to be cautious.

Even dressed in a full wool outfit, complete with boot blankets, the cold slowly began dousing my inner fire. A slight breeze, rattling the tree limbs like dry bones, whispered over the forest. With the exception of a blue jay cry every now and then, a cold silence prevailed. 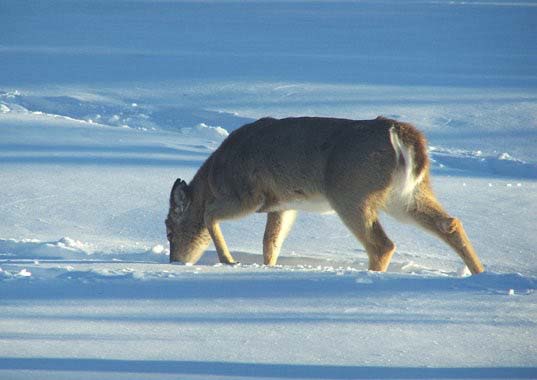 A few hours later, as the light began to slip towards darkness, movement far off on the river caught my eye. A pair of bucks climbed the steep bank and slipped into the buckthorn tangle, oblivious to the cold. With their breath condensing in a haze around their muzzles, they slowly moved through the diffuse blue light to within bow range. Neither were kings of the woods, but at that point in the season they looked plenty good to me. The smaller was a fork horn, while the other carried a lopsided rack, no doubt broken off in a fight. As if to prove that theory, he started shoving the fork horn. In the arctic air the clatter of antlers filled the forest with sound. With the deer’s attention diverted, I swiftly got my bow into position and brought it to bear. Blinking through the ice particles that had formed on my eyelashes, the sight pin hovered on the buck’s chest. Moments later he painted the snow crimson on his way towards the river, on shaky legs that failed to deliver him to the ice.

Having been pressured all season, remaining hidden from the wary eyes and noses of winter deer is critical. Justin and I, in urban hunts, have found that sitting too close to the river is recipe for disaster. As the deer move up the bank, they are looking upward. Even in full snow camouflage, they will invariably pick off a hunter near the bank. Following the trails away from the river and selecting a tree large enough to break up the human outline, will help tip the odds in the hunter’s favor.

Late season deer hunting isn’t easy. The survivors left in the field have evaded hunters for months, and their senses are honed to a razor’s edge. By using the deer’s natural inclination to moving along frozen rivers, you can succeed when most other hunters are on the couch, warm at home. 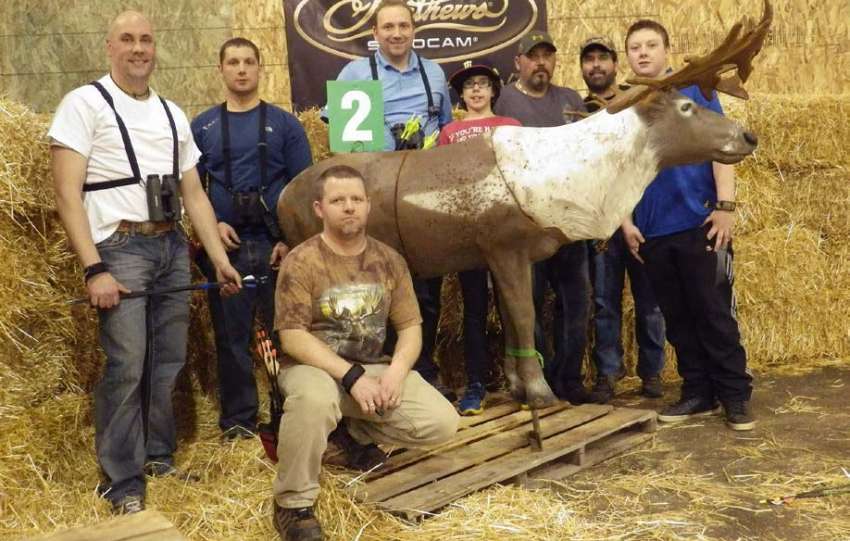 The Benefits Of 3D Archery 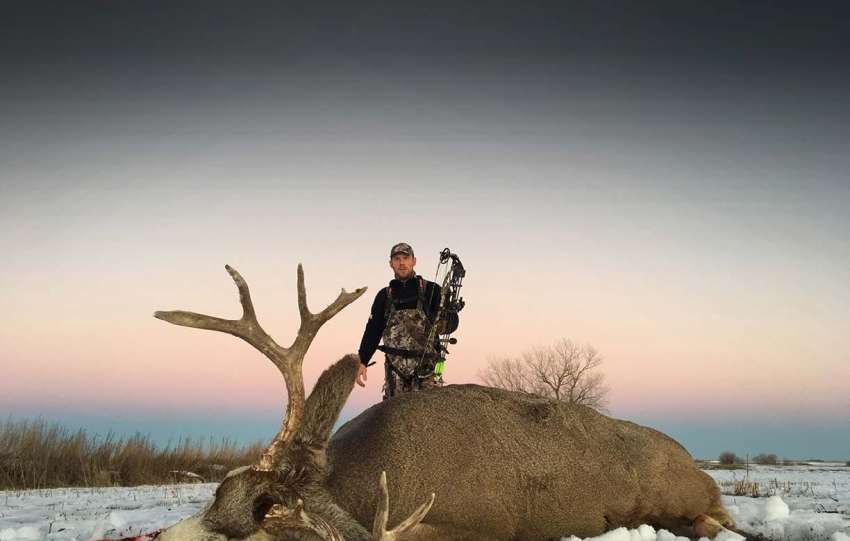 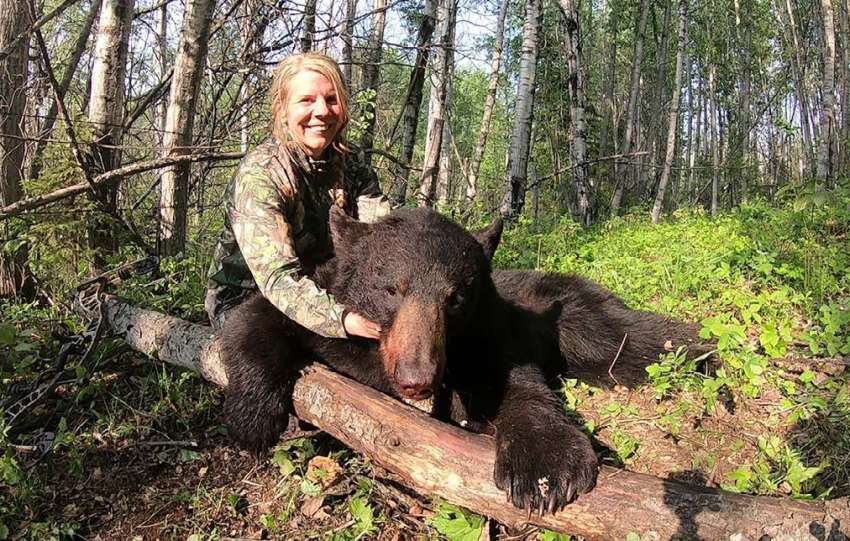