This HAS to be the first hunting article to ever begin with those three words.

It’s hard not to be a feminist with an amazingly strong and independent wife and a carbon copy little girl that make up my world. My daughter started shooting a bow when she was five years old. One evening, as we spent some time in the yard shooting, I couldn’t help but wonder what the archery world looked like for female archers in years past. Aside from summer camp, how much exposure are young women receiving in the sport? What does the pay/prize money gap look like on the pro circuit?

Once I started asking myself questions like this, the dive into that rabbit hole began, and I was eager to learn as much as I could. The “what the…” moments I discovered were abundant, and it left me excited to share my findings with as many fellow hunters as possible.

To preface: I will never fully understand the privilege and unfair advantages that I carry as a white man. When I got married, had a family, and watched years of oppression and misogyny unfold on my girls, I started to scratch the surface of what they face on a daily basis in their personal and professional lives. That includes pay disparity, leadership gender stereotyping, a daughter being told she shouldn’t play with certain toys…that she doesn’t want to get too rough and tough…because “boys don’t like that, don’t cha know?”

As a man, I carry some responsibility for the state of affairs and feel shame that this issue continues to play out time and time again I am grateful for the strides that have been made to acknowledge and rectify these insane double standards, but I recognize that there’s much work still to do.

As my research began, I was elated to find out that my newly found passion of archery and bowhunting has been leading the way in gender equality for centuries! How awesome I thought to myself, but also, if history was so riddled with strong female leads, female archers, and hunters, why are women portrayed exactly the opposite of that? Throughout history, the female role has often been portrayed to be that of prey…not a hunter, and one that would be saved by the “hunter”…as someone in need…helpless…surrounded by other prey.  As the classic “damsel in distress.”

Well, let’s do some soul-searching, fellas.  And ladies, enjoy the ride, cause this one is for you.

Many female figures in mythology, such as the Greek Goddess Artemis, were hunters. Artemis was the daughter of Zeus; she carried a golden bow and was deemed the goddess of wilderness, hunting, childbirth, virginity and all animals of the wild. (I can hardly keep up with my day-to-day let alone this kind of portfolio!). The equivalent of Artemis in Roman mythology is the Goddess Diana. Diana is labeled as the Goddess of the hunt, moon and nature. She was believed to protect wild animals and her role was to exact retribution from hunters in case of improper injury or killing. She was the first form of an “ethics police.”

A recent archeological study in Peru unearthed the remains of females buried with hunting tool kits. Women and young girls across many different ancient civilizations were buried with their bows as a symbol of respect for their abilities as warriors. Battle-scarred female skeletons and artwork depicting female hunters have been uncovered.

Historically, it’s clear that many women have paved the way for the Eva Shockeys of today. Now, I’m talking about female hunters from 9000 years ago.  You know, the ones that were labeled as gatherers? The hunter/gather division was not as clearly defined by gender as we once thought, and women are being proven to have played a huge role in the hunting community.

Female hunting deities have popped up across a number of cultures—Egyptian, Norse, Inuit. While some of them are understood to be capable huntresses themselves, they often serve as a sort of regulatory bureau for human hunters.

Depending on past grievances, goddesses were known to flat-out deny animals to human hunters. One legend depicts Sedna, the Baffinland Inuit deity sending sea mammals to the surface of the ocean as an offering of food. Like Artemis, who is often depicted as laying a protective hand on an animal at her side, Sedna required local humans to demonstrate a certain level of empathy towards animals. The souls of seals were said to remain with their bodies for three days after they were killed. And, if certain respects weren’t paid and the whole animal used, Sedna would inflict “sickness, bad weather, and starvation” upon the guilty hunters, history references.

Though the specific ways of angering hunting deities have varied in these stories, the message is fairly similar: Show respect and honor the animal. I wish our current system operated this way…poachers get off way too easy in my opinion, but that’s a discussion for another day.

Cave paintings, now theorized by some to have been primarily the creations of female artists, depict women taking both active and supporting roles in hunting. One of the best-known illustrations comes from an approximately 12,000-year-old engraved antler found in a cave in France, which depicts two men and a woman engaged in hunting a reindeer. Archaeological evidence also indicates that from early times, women hunted alongside men in India. A symbolic tribal hunt that still takes place in India today, the  Jani Shikar, occurs once every 12 years to celebrate the 15th-century victory of the women of Rohtasgarh over the invading Mughals.

In Ancient Egypt, queens often hunted from chariots for sport, not sustenance—and it was not unusual for women in that country to accompany their husbands on hunting excursions.

The revered “Amazon Woman” was said to remove a breast in order to shoot better (and here I am cursing my bino pack). 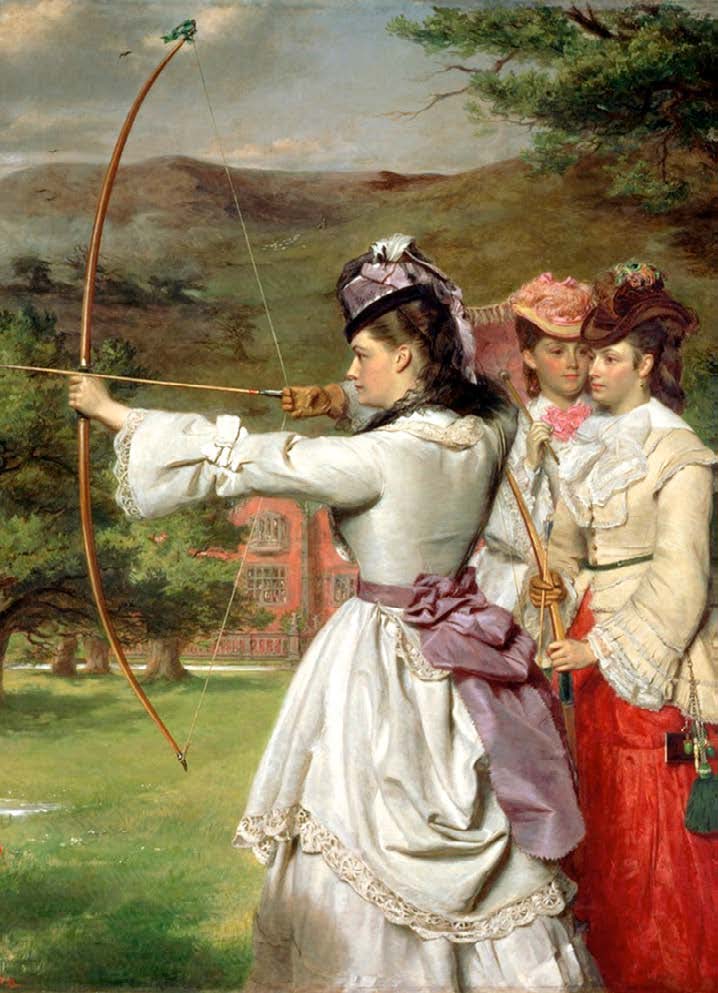 Let’s fast forward and look at the Victorian era, or as I like to call it, the “Golden Era of Archery.” We’re talking exponential growth for the sport as we know it, mainly driven by women.

Archery has been one of England’s oldest, most popular organized sports. Competitive archery leagues were common in the early 1800s among England’s upper class, where women participated while wearing corsets and petticoats. Queen Victoria, in fact, was an avid archer!

Archery was so ingrained in the female culture that entire fashion lines were created. The bow-makers and manufacturers of the day responded with a wide range of archery gear designed specifically for women. They included low-poundage takedown longbows to intricate leather and silk arm guards. A rich female archer (or archeress, as they were often known) would use two different bows, one for each distance, carried to tournaments in elaborate carrying cases.

At this time, archery was “the hot new thing” and tournaments became common among both the elite and those wanting to “keep up with the aristocratic Joneses”. With the sport’s newfound growth, the prizes and crowds of spectators grew, too. In 1860, the Grand National Archery Society became the official governing body for the sport in England. It defined its first competition round specifically for ladies: 48 arrows at 60 yards and 24 arrows at 50 yards. Let me say it again for the fellas in the back: The first archery tournament in history was designed for females.

Archery eventually developed into what is now known as one of the world’s oldest sports. It was also one of the first Olympic sports to include women. Women’s archery was added as an Olympic event in 1904, where Matilda “Lida” Howell led the U.S. women to three gold medals.

We’ve seen exponential growth in female archery. It’s clear that the past has not motivated this upsurge, given the amount of digging I had to do for this information. So, what is the motivator? What is it that is pushing females to pick up the stick and string, and to compete and hunt?

Remember Geena Davis? (“A League of Their Own?”; “Thelma and Louise? That Geena Davis.) She created the Institute on Gender in Media, which announced research findings from a new study. The institute surveyed members of USA Archery to examine the role entertainment media plays in archery, since it is now one of the fastest-growing sports in the United States. The study’s findings included how fictional archers in films and television programs have inspired young people to take up archery, especially girls. Those findings include these points of information:

“Our study is the first to examine whether archers in popular film and television programs inspire people to take up the sport,” says Geena Davis on her site. “Both The Hunger Games and Brave were released in 2012; participation in archery rose 86% from 2013 to 2014, with women’s participation increasing 105% during that period of time! It’s not surprising to me that Hollywood’s depiction of inspiring female archers has contributed to the sport’s phenomenal growth—it’s another demonstration of the powerful impact fictional characters can have on girls’ aspirations. As I always say, if she can see it, she can be it.”

Back to My Family

Coming from a father to a daughter who has literally tried to freeze my house during her “Frozen” stage, I can testify to the impact of these movies. As Geena Davis says, “if she can see, she can be it.” I think the more we can put strong, determined, skilled archers and hunters in front of women, we will be on the right path.

We have amazing archers today. You don’t have to look far to see the skill set honed over thousands of years. South Korea’s dominance of the Olympics since the 1980’s. The rise of the U.S. National Women’s Archery team. Or how about Vegas this year?! The compound women’s champion, and now back-to-back winner Liko Arreola? (She’s now just 15 years old.)

The future is bright for female archers. Let’s start lifting these women up, gentlemen. They’ve been showing us how it’s done, literally, since the beginning of time.

Enjoy the read?  Check out Josh Honeycutt’s article – How Archery Has Evolved Through the Ages

My mediums are photography, pen and paper and most importantly food.
I’m blessed enough to have multiple creative outlets that allow me to express my creativity and passion for the outdoors.
Be it Instagram @humblehunting, The Alberta Bowhunters Association, North American Outdoorsman, North American Bowhunter, North American Deer Hunter or via the award winning restaurant my wife and I started in 2016, Chartier. www.dinechartier.com.
Learned to fish on the Atlantic as a boy, now learning to hunt on the prairies as a man.

View all posts by Darren Cheverie

Tips for Bowhunting in Sub-Zero Weather 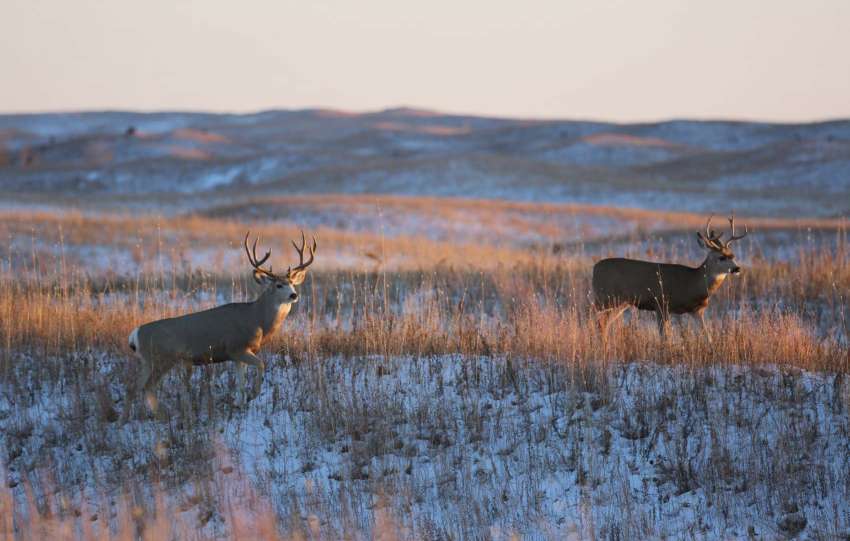 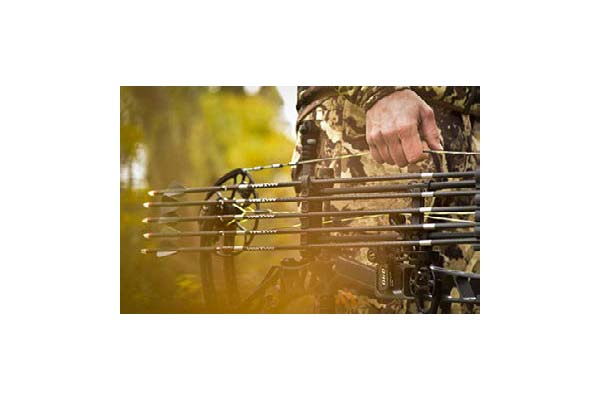