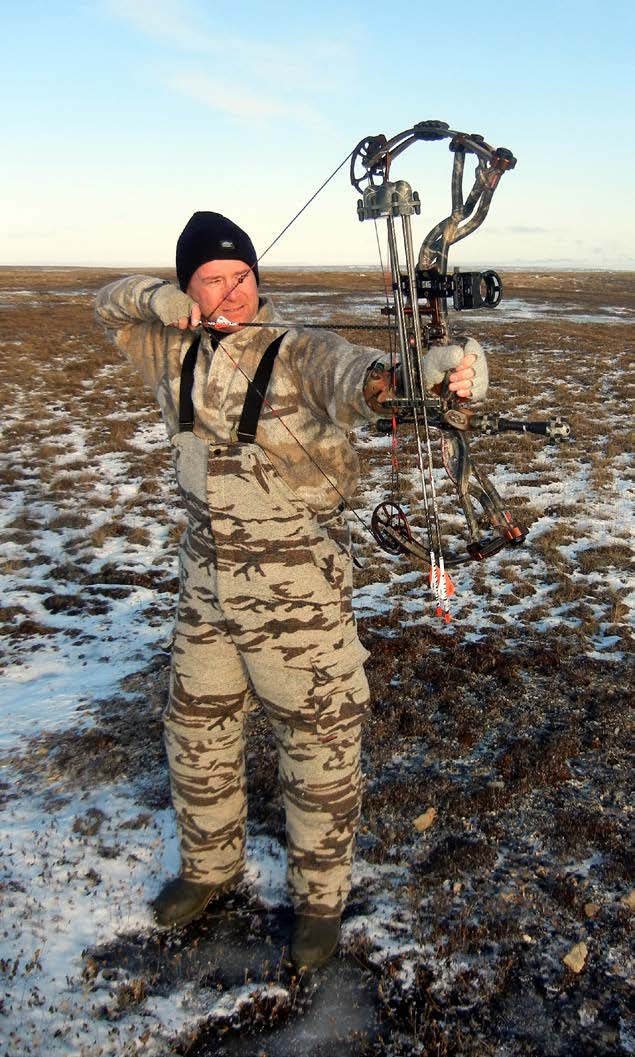 With three giant mule deer before me, I was faced with an ethical dilemma.

The biggest had a high and wide rack. All told, I figured his numbers would probably tally around 190 inches. He stood and stretched at 85 yards. I admit that it was tempting, but I knew better.

The second buck stood at 73 yards. He, too, was impressive. I practice at that distance a fair bit with accuracy. But shooting at a live animal is different. A lot can go wrong. So again, I held off. All I could see of the third one was his equally remarkable antlers. Still bedded, and mostly hidden in the standing canola, his rack was just visible enough to range him at 62 yards.

We’ve all been there…and I’ll admit, I was conflicted. Do I take a chance and hope to score on the bigger one or play it safe and lock in for the closer shot? A misguided arrow could wound and lose the deer, and that wasn’t an option. Should I even take the closest one, or pass altogether?

Like a lot of us, I practice out to 80 yards. With field tips, under calm conditions, my Hoyt delivers tight groups all day long, but that’s not the point. I rarely encourage bowhunters, regardless of skill level, to shoot at game over 40.

I’ve been hunting with a bow for over three decades. I know that outside of perfect conditions, too many things can go wrong. That said, my own limit is usually 65 yards, but only under pristine conditions—no wind, and importantly, the animal doesn’t know I’m there. While that’s still a considerable distance, I practice a lot and understand the variables—including my own capabilities and limits. I also keep my bow and arrows well-tuned, so I know what they can do.

My decision? I chose to take the smallest but closer of the three. Everything was right. While he was still bedded, I carefully dropped back down under the cover of the standing crop, dialed my flywheel sight to precisely 62 yards, drew my bow, and slowly raised up.

My shooting position couldn’t have been better. Holding my sight pin where I anticipated his chest should be when he stood, I waited. Only a few seconds passed, and he got up. Double-checking my anchor points, my grip, and sight, I knew it was go-time. With back tension increasing, I sent my FMJ on its way. Driving deep into his chest, the buck bolted, covering less than 40 yards before he paused, stumbled, and collapsed.

A great many factors go into practicing for, deciding on, and executing longer shots like this one. Here are a few things to consider as you evaluate each shot opportunity and set your own limits around when to shoot and when to pass.

With bow hunting, so many variables can affect the shot. Animals can spook and jump the string. Whitetails are notorious for this. While I see many other species acting differently, with Whitetails, I try to keep my shots under 30 yards. All animals can take a step or change their posture the instant before a release. Environmental factors like heavy snowfall, branches, tall grass, wind, and more can influence or even deflect an arrow.

For these reasons, it’s imperative that every bowhunter determine his or her own shooting limits. Some of us are comfortable with only closer shots, while others feel comfortable pushing it out a bit further. A good benchmark for most accomplished bow hunters is to still consider 40 yards as that outside limit.

Whenever I advise first-year bowhunters, I discourage anything over 30 yards. For more experienced bowhunters, personal limits may be even further. Several factors— muscle fatigue at full draw, environmental factors such as wind, your draw weight, and let-off, how precisely your bow is tuned, your shooting form, and your release— all affect arrow flight. Each aspect should be taken into consideration when determining how far equals too far to take that shot.

There is also the importance of understanding your equipment. Compound bow technology has evolved a lot over the last three decades. Thinking back to my first bow, a PSE Polaris back in 1989, I was drawing 72 pounds and shooting aluminum shafts. Arrow construction and bow technology was less refined in those days, too, so they didn’t store or send the same energy as today’s bows. In turn, arrow speed was much slower. This meant that trajectory was nowhere near as flat as today’s more advanced set-ups. Because of this, most of us viewed any shot over 30 yards as long. Back then, a 40-yard shot was out there, so anything beyond that was discouraged. With most of today’s bows providing over 80-90% let- off, holding at full draw is also much easier now than it was with the older technology.

Because it is precision-tuned, the engineering technology in today’s compounds is highly advanced. Indeed, they are capable of shooting well beyond 90 yards. However, I want to be clear that just because they can do that doesn’t mean that we should take those shots. With many IBO speeds far exceeding 310 fps, and all other things being equal, downrange accuracy is much improved. As long as the equipment is fine-tuned (meaning that the timing, between cam, is precise, center shot is exact, our sight pins are dialed in, our arrows are balanced and tweaked, and our shooting form and release is ideal, many archers are capable of making those long bombs with accuracy at the range.

The real problem is that regardless of how precise the equipment is, many different elements can affect our shot at game. When an animal’s life is on the line, the potential for human error must always be considered. Similarly, possible equipment failure must also come into the equation to consider how far is too far.

Another big part of determining your effective shooting range has to do with knowing and understanding your set-up and practicing with it to know how it shoots and when your arrow placement becomes less accurate.

One of the ways to enhance this is by adding brass inserts to the tip of your arrow. With greater F.O.C. you can maximize the energy and get greater penetration at distances past 40 yards. I know some bowhunters who don’t build their arrows to maximize F.O.C. They tell stories of when they were shooting lighter arrows that bounced off of a deer’s shoulder. Poor shot placement certainly had something to do with that but maximizing F.O.C. may have helped them in that situation by punching through the shoulder bone to penetrate vitals.

So, what does this mean for limiting shooting distances when you’re hunting?

If you’re shooting lighter poundage and lighter arrows, you may want to restrict your shots to shorter distances. Again, this comes down to understanding the energy stored and carried in your arrow. Kinetic energy is transferred from your bow limbs to your arrow upon release. At close distances such as 20 yards or under, that energy is less pronounced, but at greater distances (e.g., beyond 40), it dissipates quickly.

As you contemplate limitations, think about how your set-up is designed to carry the energy. Further, check whether you are accurately sighted into the distances you want to shoot.

And make sure you have practiced enough to shoot with confidence at your desired distances. The next consideration is the question of ethics, and asking instead, “How Far is Too Far?” 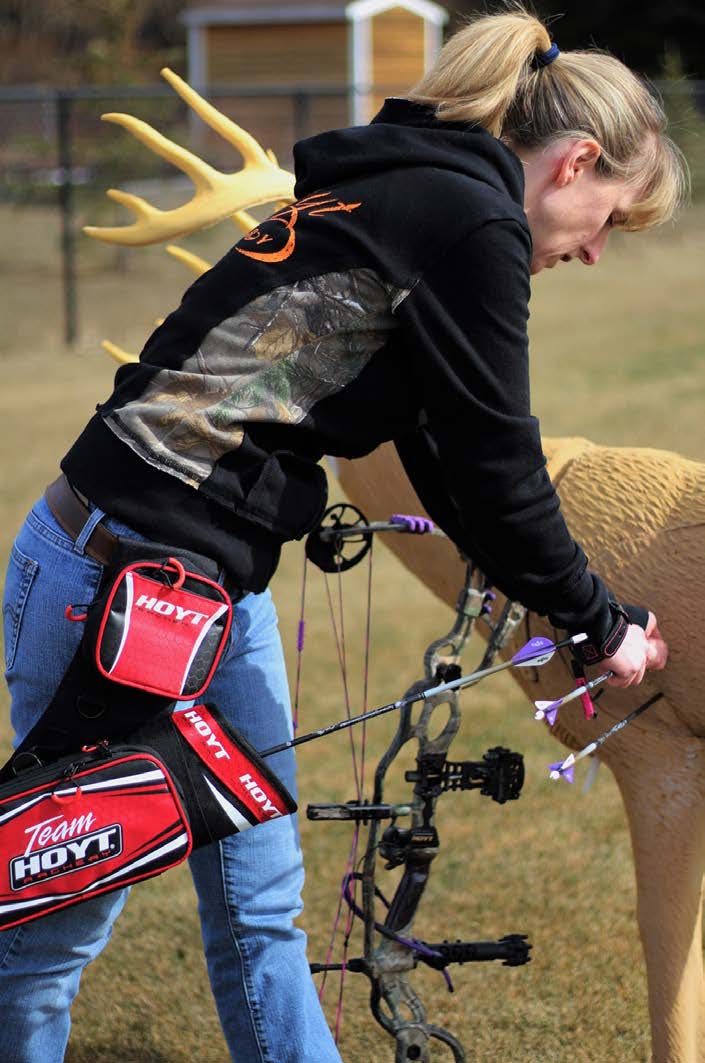 While there may be exceptions, broadside and quartering away are universally considered to be the most ethical shot options. Why? Because these offer the best chance of penetrating or passing through the heart and lungs. Hemorrhaging these vital organs results in an expedient kill. Understanding the anatomy of the game you are hunting is key.

It’s also important to recognize other variables that can negatively affect accuracy and influence a decision around how far is too far.

One of the most common issues is buck fever. Unless a hunter can lock the sight pin exactly where wanted to hit the target animal, there’s no point in releasing an arrow at any distance. “Hail Mary” shots should never be an option. Know that buck fever is a regularly experienced mental and physiological response. It foils more shots than anything else. I promise that if you’re shaking and having difficulty calming down when a deer or other target animal is in front of you, your chances of proper shot placement go way down at further distances. Learn to recognize how far is too far for you, and you’ll increase your odds of putting game down quickly and ethically.

In the end, your arrow has to penetrate deep into and ideally pass through vitals in order to do its job. Longer shots demand greater precision, so it’s necessary to do everything possible to make responsible decisions and deliver the most accurate shot you can. That means understanding your skills and establishing and sticking to predetermined limits.

If you can consistently achieve four-inch groups with broadheads under variable conditions, you’re probably safe to hunt at further distances. More importantly, consider the animal and the ethics around taking the shot or giving it a pass. It always comes back knowing and acknowledging how far is too far.

Recognized as one of Canada's most prolific outdoor writers, Kevin Wilson has been actively involved in the outdoor industry for over 30 years. An award-winning outdoor writer/photographer, videographer and show host, his work has been widely published in, and broadcast through, many of North America’s top print magazines, newspapers, websites, e-zines, podcasts, radio shows and outdoor television networks.

Former co-hosts of Canadian Outdoorsman TV, Kevin and his wife Heather, are currently team members on Wild TV’s popular Bowzone Live. With a passion for all things outdoors, they both confess a particular affinity for bowhunting whitetails and hunting wild sheep. As professional outfitters and guides, Kevin and his wife also own and operate Alberta Hunting Adventures (see www.albertahuntingadventures.com). In the off-season, Kevin owns and operates Wild Encounters Ltd. (see www.wildencountersltd.com) an Alberta-based company through which he provides wildlife conflict management services to industry and the public.

View all posts by Kevin Wilson 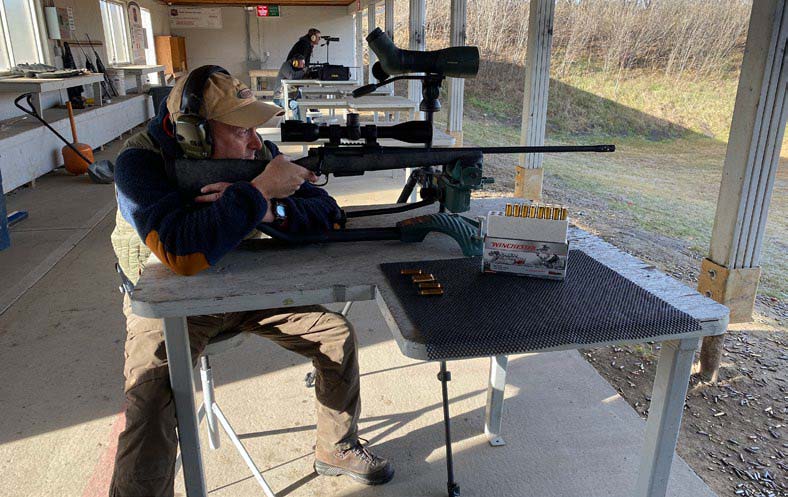 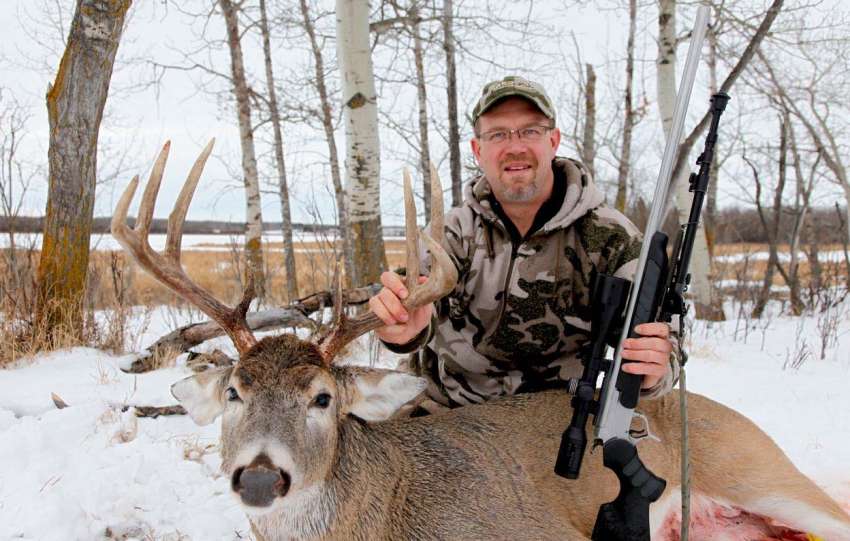